PHARR – Two Pharr-San Juan-Alamo ISD Alumni and Early College Graduates recently fulfilled their dreams of graduating from law school. Brianna Garza and Luis Guerrero were among the youngest lawyers to graduate in their class at ages 23 and 24, respectively.

Garza was part of the first cohorts of students graduating from PSJA ISD's Early College Program in partnership with South Texas College.

She received an Associate Degree in Interdisciplinary Studies one-week before her high school graduation in 2014. While in high school, she was actively involved in Drama, National Honor Society and was a Cheerleader. She graduated from the University of Texas Rio Grande Valley with a Bachelor's of Arts in Political Science and minors in Legal Studies and English in December 2016 and got accepted into the Thurgood Marshall School of Law at age 20.

“It’s surreal to have graduated already,” said the 23-year-old lawyer. “PSJA ISD taught me to excel and inspired me to test my own limits and complete my goals.”

Similar to Garza, Guerrero graduated from PSJA Southwest Early College High School in 2014 with two Associate Degrees in Mathematics and Biology. He graduated from Texas A&M University with a Bachelor's of Science in Petroleum Geology in 2017 and most recently from St. Mary’s University School of Law.

“PSJA’s Early College Program kickstarted my education,” said the 24-year-old and first-generation lawyer. “When I was 16 I was already taking rigorous college classes. It’s been an honor to study next to professionals. I have had the best of both worlds.”

According to Guerrero and Garza, college was challenging, but they were grateful for the preparation they received at PSJA ISD and endless support they got from the College Transition Program throughout their undergraduate journey.

“It truly takes a village to help us students succeed,” said Guerrero. “The PSJA Early College Program gives you so many opportunities. At the age of 18 I was able to tell my parents that they didn’t have to worry about paying for my college education. Thank you to my PSJA Family for their support and guidance.”

Having completed their law school journey, the PSJA ISD alumni now plan to take the Texas Bar exam and practice law in the Rio Grande Valley to give back to their community. They hope to inspire current students to keep working hard for their dreams.

“Take advantage of the opportunities and work hard,” said Garza. “I want to inspire women, minorities, and my community to fight for their dreams. There’s no limit to what we can do.” 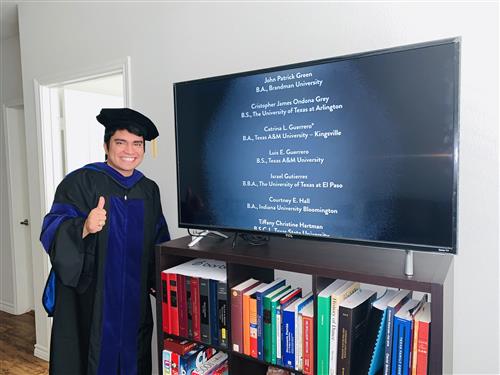