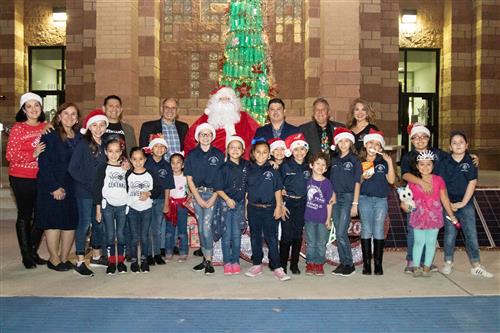 Making history, the event kicked off with the first PSJA Family Lighting of the Tree Ceremony which featured a 20 ft. solar-powered tree made by PSJA Buell Green students using nearly 950 recycled plastic bottles collected from across the district.

In addition to musical performances, festivities included delicious food sold by middle school and high school organizations, a Holiday Gift Market featuring handcrafted items by students and parents in the PSJA Pathways Toward Independence/LIFE Program, Buell Green Inc., and the PSJA Parental Engagement Program, and free games and entertainment for families. All proceeds from the event went to benefit students and participating programs.

"It was exciting to see hundreds of families make the time to join us for our first ever PSJA Family Posada," said PSJA Superintendent Dr. Jorge L. Arredondo. "Thank you to everyone who played a role in making it possible."

The next Centennial event hosted by PSJA ISD will be its Movie Night happening Jan. 17, 2020 at the PSJA Stadium. For more information about the PSJA Centennial celebrations visit www.psjaisd.us/centennial or call 956-354-2027.